Since the beginning of the era of designer eyewear "modern and flashy" in the 1960s, DIOR has been one of the top international eyewear manufacturers for luxury women's, men's and sunglasses. Especially remarkable are the Dior glasses and sunglasses of the 80s.

Christian Dior eyewear models from the 1970s and 1980s are still highly sought-after collector's items today. Dior's oversized "Windshields" glasses are a must for the vintage eyewear soul.
Since the late 1960s, Wilhelm Anger, founder of the Austrian Vienna and the famous brand Carrera Brillen und Carrera Sonnenbrille, took over the company.
It was Wilhlem Anger who coined the glasses slogan "Dress your face". Austrian-made Christian Dior eyewear was synonymous with luxury. A new, memorable and visible brand name with a catchy logo was needed. Among other things, this resulted in the product name DIOR with the well-known and famous DIOR frames with the characteristic "CD" logo.
Christian Dior eyewear and DIOR frames had their own hip-hop fan base in the late 1970s, before they discovered Cazal Eyewear (CAZAL glasses).
In the 1970s, the Dior eyewear range pioneered Viennaline's new Optyl cast frame material, which enabled three-dimensional effects to be achieved.
DIOR spectacle frames and frames from Christian Dior became more and more colorful and more like jewelry. Among other things luxury was achieved by using enamel and gemstones of these DIOR glasses. This and the typical DIOR design enhanced the luxury of the brand and formed the typical DIOR glasses character.
Until 1982 twelve new models of glasses were produced per year in six colors and two sizes. One of the eyewear highlights of 1986 was the introduction of a lizard-skin leather finish for DIOR glasses. A real DIOR frames unique selling point!
Dior was a pioneer in transferring the name to a licensed eyewear brand in the 1960s. The Safilo Group acquired the DIOR brand in 1996 and turned Dior eyewear models into high-fashion accessories.

Christian Dior Model 2043 Color 50
Check out these stunning sunglasses! The Dior brand is synonymous with Haute Couture fashion, luxury and exclusive design. The color intensity and the shape of these Dior sunglasses give the model a futuristic look. Made in the 70s, an...
€164.74 *

Christian Dior Model 2160 Color 12
This couture vintage sunglasses by Christian Dior is a rare example of the 1980s. Elegant and lightweight women sunglasses made of durable Optyl with the discreet CD logo. New grey lenses Discreetly CD logo on both temples Light and...
€125.75 *

Christian Dior Model 2340 Color 81
An exclusive DIOR model made from Optyl and with a very special touch. You can insert the temple small scented pillow.
€125.75 * 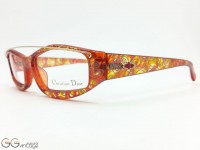 Christian Dior Model 2598 Color 30
Own unique pattern of warm colors, crafted with a golden bow, made of lightweight and durable Optyl Dior model.
€164.74 *

Christian Dior Model 2236 Color 12
Made of durable Optyl material with oversized frame, a distinctive DIOR model.
€116.00 *
Viewed
This website uses cookies to ensure you get the best experience on our website. More information
Accept